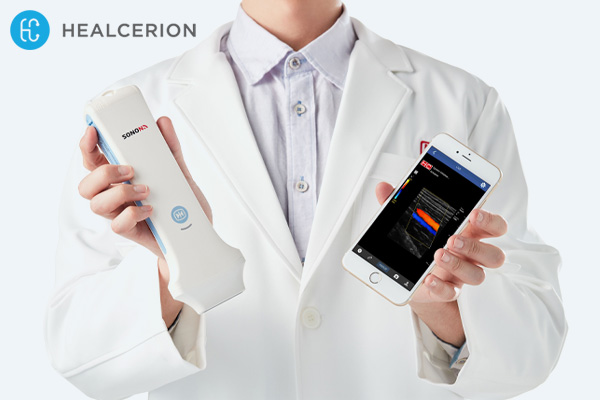 Healcerion is a medical equipment provider that has developed a portable ultrasound image diagnosis device. I worked as a doctor at a local hospital before I set up Healcerion in 2012. Two years later, the company released the world’s first mobile ultrasound device that can be connected to a smartphone.

While working as a doctor in the emergency room of the hospital, I saw women in their last month of pregnancy being rushed to the ER. If they had serious problems, they had to be transferred to larger hospitals for surgery or other treatment. In the ambulance, we could monitor the women, but we couldn’t monitor the babies inside them. I thought I could check the condition of the fetuses, even in the ambulance or at the scene of an accident, if I had a portable ultrasound scanner. At the time, though, there was no such device available. So I decided to start my own business.

Ryu’s career is rather extraordinary. He studied physics and electronic engineering at Seoul National University. After graduation, he set up a venture firm that produced high definition digital image storage devices. Later, he entered Gachon Medical School and he worked as a medical doctor for three years. By observing pregnant women in critical condition being transported to hospitals, he felt an urgent need for a portable ultrasound instrument—something like a stethoscope. However, there were no companies that made ultrasound scanners for on-site diagnosis.

So he created his own firm for a second time. As both an engineer and doctor, he unveiled the first portable ultrasonic device to the world. But the process was far from easy.

An ultrasound scanner looks like a digital device, but it does have analog elements. It uses a high voltage direct current, and it is vulnerable to heat and noise. So it’s important to manage heat and noise levels while holding it. I wondered how to resolve this problem by sifting through papers and relevant data, but I found no solution. So, I just made a device at random at first. It produced a lot of heat and noise, so I tried again and made another one. I repeated this process alone for two to three years. At last, I was able to release the world’s first mobile, handheld ultrasound scanner.

In general, ultrasound machines used at hospitals weigh over 100 kilograms. That’s why they are operated in specific locations like ultrasound rooms. They are quite expensive, priced at over 90-thousand US dollars each. To build a handheld ultrasound device that can be used anywhere, it is necessary to manage heat levels and reduce excess noise to an appropriate level. It was almost impossible to make a portable, lightweight and easy-to-use ultrasound device that also ensures wireless connectivity. But Healcerion never gave up and kept trying again and again. Through his experience in his first business venture, Ryu had the technology of producing clear pictures by removing noise in images and amplifying signals. He incorporated that technology into his medical knowledge to develop a handheld, wireless ultrasound scanner called Sonon. This first product of Healcerion has been used in various medical settings. 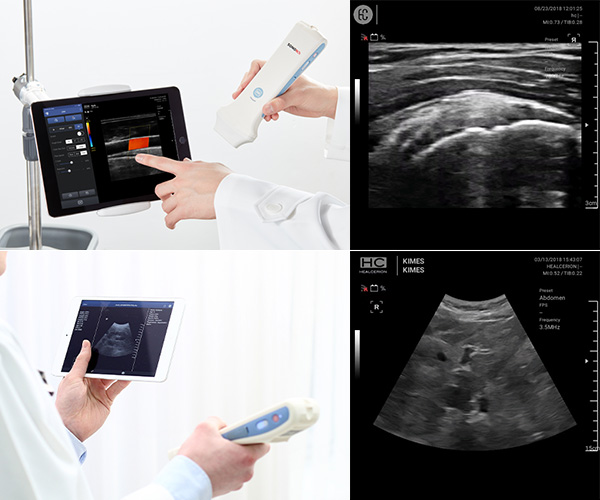 We work with the Korea International Cooperation Agency and the U.N. to provide our products to local healthcare centers in those countries. In addition to developing nations, our products are widely used at small, primary-care clinics, which mostly lack X-ray equipment. In many cases, doctors there only use stethoscopes. When deciding whether to send a patient to a larger hospital, the clinics can use our portable ultrasound scanner. For injections, it is also effective in checking the position of nerves and blood vessels. I’d describe our portable ultrasound scanner as a stethoscope that helps visualize internal conditions.

The wireless portable ultrasound device developed by Healcerion in 2014 is one-tenth of the price of conventional ultrasound machines and one-100th the weight of existing ones. The small, light device can be carried in a pants pocket and fits right in your hand. It can transmit diagnosis information wirelessly so ultrasound images can be seen on smartphones or tablet PCs. That means it does not need an extra monitor. Using smart equipment, doctors can see ultrasound images easily and treat patients at traffic accident sites, inside airplanes and in remote areas with poor access to medical facilities. This device also proved to be a useful on-site diagnostic tool for COVID-19.

The portable ultrasonic device shines all the more brightly when dealing with highly contagious diseases like COVID-19. It can immediately identify lung diseases like pneumonia on the spot. It’s difficult to conduct CT scans on all patients, through using large machines, and not every patient really needs it. In that case, the portable device comes in handy. Some COVID-19 patients look fine but may actually have pneumonia, and our portable device has no problem finding it.

This device has a higher diagnosis rate, compared to X-rays. So, international organizations such as the U.N. and the World Bank, as well as governments in different countries, are eagerly looking for portable ultrasound diagnosis devices.

For early diagnosis of lung problems caused by COVID-19, the portable ultrasound device is used at COVID-19 screening centers, residential treatment centers and negative pressure wards. It has no cords or wires, so it can use a sterile, disposable cover to block the source of infection. The easy-to-use, safe and high-performance device is greatly helpful for doctors who are not familiar with lung ultrasound. In the wake of the COVID-19 outbreak, the innovative device has drawn special attention from the international community. An increasing amount of countries and international organizations are looking for Healcerion’s products, which have already been exported to over 40 countries around the world. Now, the company is preparing for a new future.

To create an ultrasonic device capable of diagnosing the patients’ conditions more easily and effectively, medical imaging and AI technology should be combined. I believe our joint research on AI-based ultrasound devices with the Massachusetts General Hospital affiliated with Harvard Medical School will boost our ultrasound imaging capabilities.

As the world’s first distributor of a portable ultrasound scanner, we’ll collect extensive data for new, ultrasound diagnostic devices or platforms using AI to grow into a unicorn company. This is our dream.

Healcerion opened a new era of ultrasound equipment by developing a portable ultrasonic scanner that can be connected to smart IT devices. Moving beyond a pioneer in the market, it is developing into a smart healthcare platform company.